I would like to encourage anyone who wants a thorough knowledge base to make your sheep operation successful to sign up for the upcoming Small Ruminant Profit School put on by our Sheep & Goat Development Office. Kelley Yates, the Executive Director, has worked diligently to put a series together that covers not just the basics but also addresses key details like: how to figure the least cost feed based on the animal’s nutritional needs, marketing choices, genetics and record keeping. The University of Kentucky, Kentucky Agriculture Development Board, Kentucky State University and the American Sheep Industry Association have contributed resources to develop the excellent course material. KSGDO is offering a free mentorship program where new producers are paired with experienced sheep farmers. Sign-up details are at: www.kysheepandgoat.org. Sign up by Sept. 7th. Classes start Sept. 26th. 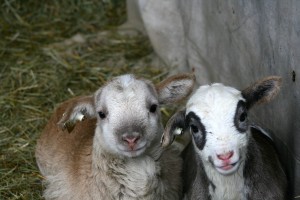 Tayetta and Loretta, Bottle Lambs delivered by Taylor Bustle, whom they are named for

A new season in the Lamb Nursery began this week with the arrival of Tay and Loretta from the Kubale Farm. 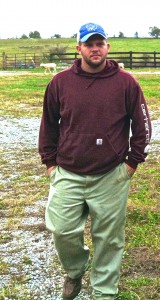 Lambs become bottle babies only if their mothers are unable to feed them.  In the case of these fraternal twins, the mother developed mastitis, an infection of the udder, which prevented her from nursing.  So, Tay and Loretta, named for Taylor Bustle, the farm manager who assisted in Tay’s birth, are under my care at Four Hills Farm.

They have a pen in the lamb barn but every night I bring them into a pen in the basement.  The temperatures have dropped and the precipitation has started. 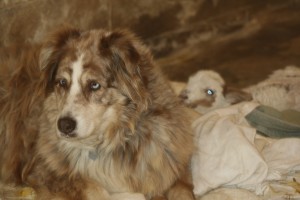 In the past, the first bottle baby would sleep with Missy, the Australian shepherd.  She is pictured here with her last bottle baby, Little Miss, last winter.  Missy died in March.

If Tay and Loretta were in the field like the other new lambs, they’d have a nice big fat mother to generate heat all night long.  But, since these two have a little rattle sound in their noses, I bring them in at night.  We don’t use anti-biotics so their sniffles can’t be treated with medicine but heal via TLC. 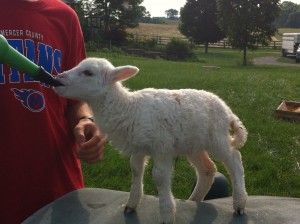 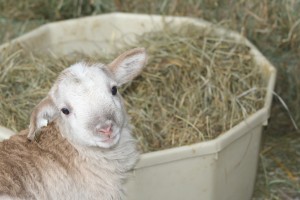 Tay is much larger and was more developed at birth than Loretta.  Loretta has the scoop nose associated with a less developed lamb.  She is not a premie but is an average-sized lamb.  When feeding them, it’s important that I make them stretch their necks to reach the bottle and that the bottle’s angle is at least 45 degrees.  This positioning prevents formula from going into the nose.  I will post a video of bottle-feeding later.

Tay and Loretta are fed three to four times a day.  Tay has been drinking at least two 12 ounce bottles a feeding and Loretta has just gotten to a little more than one.  They sleep in a container of hay.

We recycle here at the farm.  Our baby bottles were once filled with Sam Adams beer, but now offer a different sustenance. 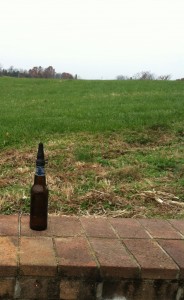 We use Sam Adams beer bottles to feed the bottle lambs, drained of original contents, of course 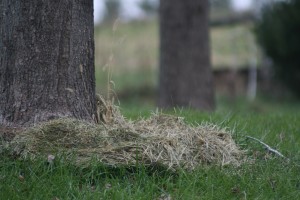 Each morning after I return Tay and Loretta to the lamb barn, I dump their bedding around the trunk of a maple tree.

Click the image below:  a video of a Lampede! 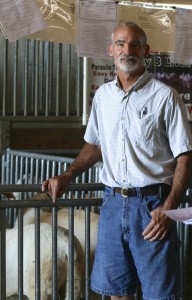 The Farmer and I attended the Katahdin Hair Sheep International Expo at Tennessee Tech last week.  The two days of programming included presentations by scientists, breeders, a butcher, marketers, farmers, and ag professors, and concluded with a sheep auction.

This was the first KHSI conference I attended.  I learned some things.  There are more Katahdin Hair Sheep in Mexico than any other breed.  The breed was develop by Michael Piel (of Piel’s Beer) near Mt Katahdin in Maine, which coincidentally is within shouting distance of Sebec Lake, where The Farmer’s family has owned camps since the 1890s.  Fifteen years ago a coalition of US and Mexican sheep farmers recognized that hair sheep (sheep that shed) do well in warm climates and worked together to increase the population of the breed.  Two breeders instrumental in this work, 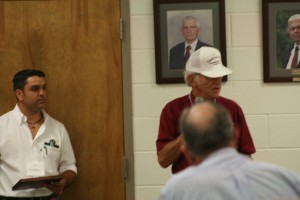 Much to my surprise, there is no typical sheep farmer.   Can you imagine the annual meeting of international professionals where babies attended the presentations? Where several generations of a single family shared the experience?  Where women and men were equally represented on the program and in the audience?  Where people speaking different languages shared a table for days?  Where the age of attendees went from a few months to 82?  Where people of all races were united on a common subject? We shared a table with a chicken farmer from Alabama looking to diversify and two men from Colombia who filmed the whole conference.  They plan to translate the presentations and broadcast it when they return home. 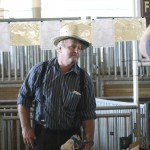 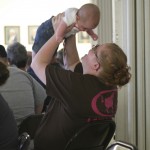 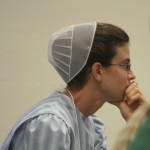 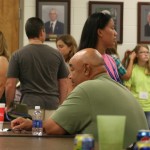 The talks.  I will refrain from expressing much opinion other than to say that since this organization began primarily as a coalition of breeders, it is natural that scientific and artificial methods of reproduction are of use to some of the producers.  The scientists enthralled and appalled me with their descriptions of invasive breeding procedures.  In AI (artificial insemination), a donor ewe is pumped full of hormones and then operated on to remove her eggs (a harvest) which are then implanted in surrogates.  Selecting for characteristics, culling animals that are weak in conformation or immunity, hand-jobbing rams, squeezing placentas . . . . I was a little squeamish with the frankness of some of the talks.  Very few breeders are using AI at this time in the sheep industry as it’s expensive and requires the services of trained professionals.

One talk concerned pros and cons of various grasses.  Our sheep are grazing sorghum sudan right now which means they are eating forage off the ground.  This plant resembles corn and provides shade so it has several good attributes.  Stomach worms are a major problem for sheep.  They get the worms from eating grass.  One speaker suggested strategies for using various wormers to try and innoculate the flock against particular deadly parasites.

Watch out for the next photo. 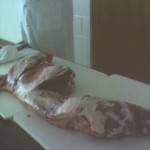 Bwahahahaha. I am thinking Mummers Parade or Chinese New Year.  A butcher cut up this carcass in the front of the room.  His action was projected onto screens.  I learned that there is a lot of meat in one sheep.

I admit that during the second afternoon I took a side trip to the Goodwill in Cookeville.

Breeders brought sheep to sell. The sheep were kept in pens for customers to evaluate.  Here is a ram with an opinion. 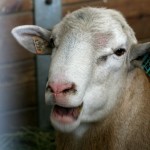 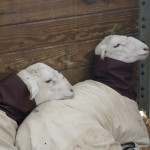 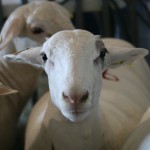 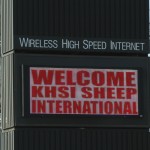 We stayed at the Clarion Hotel in Cookeville that had a cool indoor/outdoor pool.  You swam under a hard plastic barrier to get from one pool to the next.  There was also a very nice hot tub.

On our trip back up Hwy 127, we stopped for lunch at the Wolf Creek Dam which holds Lake Cumberland in her stays.   Dams built in the 1950s are amazing structures, back when America seemed to have real money for infrastructure improvements, when things were made to last.  Here is a blurry photo of a predator–a heron striking the water for a fish.  He missed at least five times. 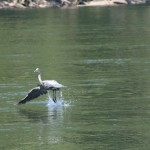